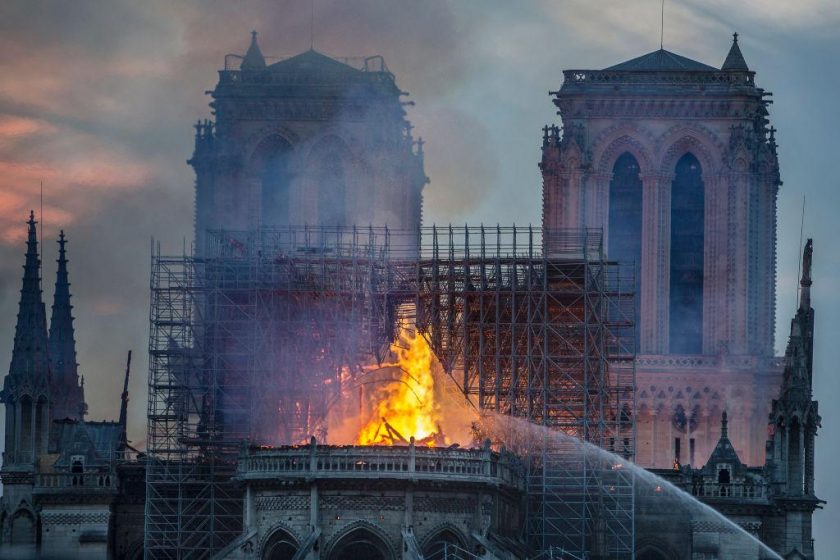 Authored by Soeren Kern via The Gatestone Institute,

Anti-Christian hostility is sweeping across Western Europe, where, during 2019, Christian churches and symbols were deliberately attacked day after day.

Gatestone Institute reviewed thousands of newspaper reports, police blotters, parliamentary inquiries, social media posts and specialized blogs from Britain, France, Germany, Ireland, Italy and Spain. The research shows (see appendices below) that roughly 3,000 Christian churches, schools, cemeteries and monuments were vandalized, looted or defaced in Europe during 2019 — which is on track to becoming a record year for anti-Christian sacrilege on the continent.

Violence against Christian sites is most widespread in France, where churches, schools, cemeteries and monuments are being vandalized, desecrated and burned at an average rate of three per day, according to government statistics. In Germany, attacks against Christian churches are occurring at an average rate of two per day, according to police blotters.

Attacks on Christian churches and symbols are also commonplace in Belgium, Britain, Denmark, Ireland, Italy and Spain. The attacks overwhelmingly involve Roman Catholic sites and symbols, although in Germany, Protestant churches are also being targeted.

The perpetrators of anti-Christian attacks — which include acts of arson, defecation, desecration, looting, mockery, profanation, Satanism, theft, urination and vandalism — are rarely caught. When they are, police and media often censor information about their identities and ethnic backgrounds. Many suspects are said to have mental disorders; as a result, many anti-Christian attacks are not categorized as hate crimes.

In France and Germany, the spike in anti-Christian attacks dovetails with the recent mass immigration from the Muslim world. The lack of official statistics on perpetrators and motives makes it impossible to know precisely how many attacks can be attributed to Muslim anti-Christianism or the jihadist cause.

In Spain, by contrast, attacks against churches and crosses are overwhelmingly carried out by anarchists, radical feminists and other far-left activists, who appear to be striving for Christianity to be permanently removed from the public square.

The motives behind the anti-Christian attacks, which are often met with public indifference, seem to fall into four broad categories:

“The desecrations have an evident anti-Christian character. Drunk with fierce hatred, the vandals want to give their actions a clear anti-religious dimension. In recent months, anti-Semitic gangs have desecrated Jewish cemeteries, ‘signing’ their actions with swastikas. In the case of the desecration of Catholic churches, vandalism is not ‘signed.’ It speaks for itself: heinous mockeries of the figure of Christ on the cross and the desecration of high altars.”

European media outlets, which often amplify attacks on Muslims, have tended to downplay malicious acts against Christians. The issue of anti-Christian vandalism was rarely reported by the European media until February 2019, when vandals attacked nine churches within the space of two weeks. The issue made headlines again in April 2019, when a suspicious fire gutted the iconic Notre Dame Cathedral in Paris. Since then, however, the European media are once again shrouding facts in silence.

The French newspaper Le Monde has disputed the government’s use of the term “anti-Christian acts” and warned politicians not to “instrumentalize” the issue:

“More than a thousand acts a year, an average of three per day: the number is high, but what does it cover? Can we really speak of ‘profanations’ — a strong term — which implies an attack on the sacredness of a place of worship?

“Ideological motivations are in the minority: it is mainly about thefts and vandalism. The perpetrators often are minors.”

Annie Genevard, a French MP for the center-right Republicans party, has called for a parliamentary investigation in order better to understand the nature and motivations of anti-Christian attacks. In an interview with the French newspaper Le Figaro, she said:

“Recently, two terribly serious acts of vandalism were committed in symbolic places and shocked me greatly. A few days ago, the fire in the Church of Saint Sulpice, a church that houses remarkable works: there is nearly a million euros of damage and works are irretrievably lost! And some time ago, vandals broke into the Basilica of Saint Denis and damaged stained-glass windows and the organ. Saint Denis it is not only a place of Christian worship, it is the necropolis of the kings of France! It is a meeting place between our national history and our Christian roots. That one dares to attack this monument is really shocking not only for Christians but for many citizens, whatever their convictions. When an anti-Christian act is committed, we turn our backs on the history of France, which has an intimate connection with the Christian religion.

“To attack a Christian tomb or a church, whatever the motivation of the author, is a way to attack one part of our collective identity, because Christianity and its monuments have shaped our culture, our history and our landscapes. Seeking to destroy or damage Christian buildings is a way of ‘wiping the slate clean’ of the past. In an era where the most absolute cultural relativism reigns, it is all the more serious that some of our oldest and most valuable landmarks are endangered. A civilization that would deny and turn away from its past would be a civilization that would be lost. I think this is worrying, and there is a need for a strong political response.”

In an interview with the Italian magazine Il Timone, the Bishop of Fréjus-Toulon, Dominique Rey, said that the attacks against churches in Europe are taking place within the context of a European society marked by secularism, nihilism, hedonism, cultural and moral relativism, consumerism, and the widespread loss of the sense of the sacred. He noted:

“In the past, even those who said they were non-Christian lived in a cultural context marked by Christianity…. roots that have been abandoned by our culture and by our societies. Once the Christian roots, which were the common denominator, were removed, people turned to communitarianism, which led to a social fragmentation that is leading to a break. To find a common base of values and points of reference, Europe must restore centrality to its Christian roots….

“There is an evolution of acts of profanation against monuments, but also against the Catholic faith itself. In the past, even if one was not a Christian, the expression of the sacred was respected. We are facing a serious threat to the expression of religious freedom. Secularism must not be a rejection of the religious, but a principle of neutrality that gives everyone the freedom to express his faith.

“We are witnessing the convergence of laicism — conceived as secularism, which relegates the faithful only to the private sphere and where every religious denomination is banal or stigmatized — with the overwhelming emergence of Islam, which attacks the infidels and those who reject the Koran. On one hand, we are mocked by the media … and on the other, there is the strengthening of Islamic fundamentalism. These are two joint realities.”

The French political analyst Jérôme Fourquet, in his book — French Archipelago: Birth of a Multiple and Divided Nation — shows how the de-Christianization of France is taking place within the context of mass migration from the Muslim world. He provides extensive statistical data — for instance, that less than 5% of French people regularly attend Mass on Sundays — to show that France’s detachment from Christianity is so far-reaching that the country now is effectively “post-Christian.” He writes:

“There is a growing de-Christianization, which is leading to the ‘terminal phase’ of the Catholic religion…. For hundreds of years the Catholic religion profoundly structured the collective conscience of French society. Today this society is the shadow of what it once was. A great civilizational change is underway.”

Appendix I: Attacks on Christian Churches and Symbols in Europe in 2019

Gatestone Institute reviewed thousands of newspaper reports, police blotters, parliamentary inquiries, social media posts and specialized blogs from Britain, France, Germany, Ireland, Italy and Spain. The research found that approximately 3,000 Christian churches, schools, cemeteries and monuments were vandalized, burned, looted or defaced in Europe during 2019 — at more than five a day, a record year for anti-Christian hostility on the continent.

Suspicious Fires at Churches in Europe in 2019:

Attacks on Christian Historical Sites in Europe in 2019:

Desecrations of Cemeteries in Europe in 2019:

Urination, Defecation and Exhibitionism at Christian Sites in Europe in 2019:

Anarcho-Feminist-Satanist and Politically-Motivated Attacks on Churches in Europe in 2019:

Attacks on Nativity Scenes in Europe in 2019:

Islam-related Attacks on Christians and Christian Sites in Europe in 2019:

Appendix 2: Country-by-Country Attacks on Christian Churches and Symbols in Europe in 2019

The French government recorded 1,063 anti-Christian attacks in 2018, compared to 1,038 such attacks in 2017 and 949 in 2016. Overall, the number of attacks surged by 245% between 2008 and 2016, according to the Interior Ministry, which noted that attacks on Christian sites account for approximately 90% of all attacks on places of worship in France.

The trend shows no signs of abating. There were more than 1,000 anti-Christian attacks in France during 2019, according to data compiled by Daniel Hamiche, Editor-in-Chief of the blog, Observatory of Christianophobia. Hamiche has been an indefatigable chronicler of the destruction of Christian heritage in France. Gatestone Institute also consulted hundreds of national and local newspapers, as well as dozens of blogs, specialized websites and police blotters. Following are a few examples of anti-Christian attacks in 2019: